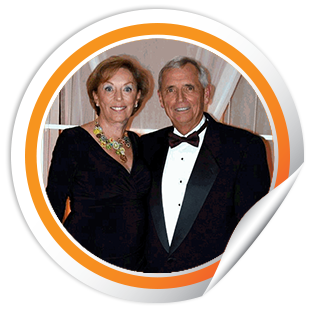 "Within an hour, my wife and daughter said they could already see a noticeable difference in my behavior. I stayed at Good Samaritan for four days and couldn’t have asked for better care while I was there."

After they had lost their son to cancer, Ren and Roseann Nardoni started the Paul R. Nardoni foundation in his memory. However, they never thought it might help save Ren’s life.

"Over the last 14 years, through our networking and fundraising efforts with several health organizations, my wife, Roseann, and I have acquired knowledge on various health subjects," Ren says. "Because of this, she was able to recognize my symptoms when I was having a stroke, ultimately saving my life."

During one of his many meetings as the human resources director for the City of West Palm Beach, Ren's hand began to curl and he had trouble speaking. He called Roseann, and she suspected he was having a stroke.

"Fortunately, she was close by, so she picked me up and drove me to Good Samaritan Medical Center, which happens to be a primary stroke center," Ren says.

In two minutes, Ren was receiving a CT scan. The doctor decided he was fit to receive tissue plasminogen activator after seeing Ren's results, which is a medication that breaks down blood clots.

"Within an hour, my wife and daughter said they could already see a noticeable difference in my behavior," Ren says. "I stayed at Good Samaritan for four days and couldn't have asked for better care while I was there."

Like most stroke patients, Ren needed help getting back to shape. He started work with speech therapist Sarah Goodman.

"I recently had my last session with her, and the results have been astounding," he says. "She not only helped me with my speech but she went above and beyond to teach me how to handle certain social situations – for example, what to do if I couldn't think of a word during a phone call at work."

Ren was able to recover quickly and get back to work within two weeks. In three weeks, he was playing golf again. By the fourth week, he was playing tennis and regularly exercising.

"I owe my life to my wife, Roseann, for recognizing my symptoms and to the amazing stroke team at Good Samaritan Medical Center for their quick actions and outstanding care," Ren says.