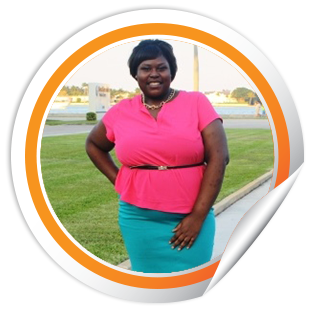 "I feel fantastic. I've already lost 107 pounds, and I am very confident that in no time I will achieve my goal weight of 198 pounds."

Most women in their 20s love to shop. But 24-year old Nina Robinson was an exception.

"At 356 pounds, the clothing stores I liked didn't seem to have many options for me," Nina says. "There was only one small section in each store dedicated for plus-sized people, and if it were up to me, it would have been called the section with no selection."

"Because of my weight, I was insulin resistant and pre-diabetic," Nina says. "I also had to use a CPAP oxygen system for my sleep apnea. Waking up in the middle of the night with a burning feeling in my throat, coughing and unable to breathe became a regular occurrence."

Like many people in her situation, Nina tried dieting and exercised but with no success.

"Nothing worked for me, and I gradually became more and more tired and depressed," Nina says.

Then one day her mother, who worked at Good Samaritan Medical Center's childcare department, suggested to Nina that she look into the MyNewSelf Surgical Weight Loss Program.

"From the minute I met the team at Good Sam was very thorough and answered all of my questions," Nina says.

Nina considered her options and settled on receiving a vertical sleeve gastrectomy.

"Mainly because it is difficult to reverse, and I didn't want to give myself the option to cheat," Nina says.

The procedure was performed at Good Samaritan Medical Center without any complications.

"I walked out after merely two days in the hospital. Two weeks later, I was back at work," Nina says.

Ten months after the procedure, Nina was ecstatic about the results.

"I feel fantastic. I've already lost 107 pounds, and I am very confident that in no time I will achieve my goal weight of 198 pounds," she says.

Nina has also changed her eating habits, using the success of the operation to live healthier.

"I've been eating much smaller portions, and I've noticed that my food preferences have actually changed,” she says. “Vegetables I never thought I would eat before, I now eat every day."

The best part of Nina's story is that now she isn't limited to those plus-size sections anymore.

"Over these past months as I became more comfortable in my own skin, I developed a newfound love of shopping," Nina says. "I can't keep myself away from the stores!"