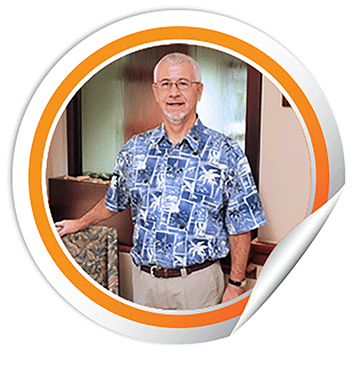 When Chris Vallo started having problems breathing, he knew he had to take his weight seriously.

"I was raised in an Italian family where the food is loaded with carbs and made in large quantities," Chris says. "I couldn't help but overeat."

His diet finally caught up to him, leading to a quadruple bypass surgery, and then two years later, a main aorta valve replacement.

"As the years passed, I gradually gained more and more weight," he says. "At 5 feet 9 inches and weighing 287 pounds, I was in a life-threatening state."

The health problems started to compound. First, he had to use an oxygen machine so he could breathe properly when he slept. Then, he started having problems breathing when he bent over to tie his shoes.

"Throughout the day, I would also experience dizziness, balance issues, and pain in my knee and spine," Chris recalls.

He had little choice but to take a leave of absence from his job as a security supervisor.

"My cardiologist warned me that if I didn’t lose weight, my life would be in jeopardy," Chris says. He decided to take action.

When diet and exercise don't work

Chris went to his primary care physician, Dr. Anita Wellborn, who is on the medical staff at Good Samaritan Medical Center. She referred him to the hospital's My New Self Surgical Weight Loss Center

After discussing his options with a bariatric surgeon, Chris decided to undergo a vertical sleeve gastrectomy.

"It would allow me to lose the most amount of weight in a short period of time," he says.

The operation couldn't have gone better, and Chris was out of bed in no time. He was surprised at how quickly he was back on his feet following surgery.

"I was able to walk up and down the halls of Good Samaritan Medical Center relatively quickly with the help of a walker," Chris says. "Two days later, I was discharged from the hospital, and within a week and a half, I no longer needed any pain medications or walking aid."

Just as quickly as he recovered, Chris began to notice the effects on his weight.

The surgery wasn't without its lifestyle tradeoffs, which Chris was prepared for. He had reached his breaking point and was ready to make real changes towards a healtier lifestyle. He eats smaller meals now and spreads them out throughout the day. His breathing problems have since stopped, and his pain and balance issues have gone away.

"The last time I felt this good was in my late teens or early 20s."